When you first get started in Starsector, the routine of doing a mission and then paying for more supplies and fuel sets in quickly. Given the cost of each, trying to figure out a sustainable profit becomes a necessity. Outside of active pursuits like raiding merchant fleets or attacking pirates, the main passive way to make profit is to have your own colonies. This quick guide will help you get started. 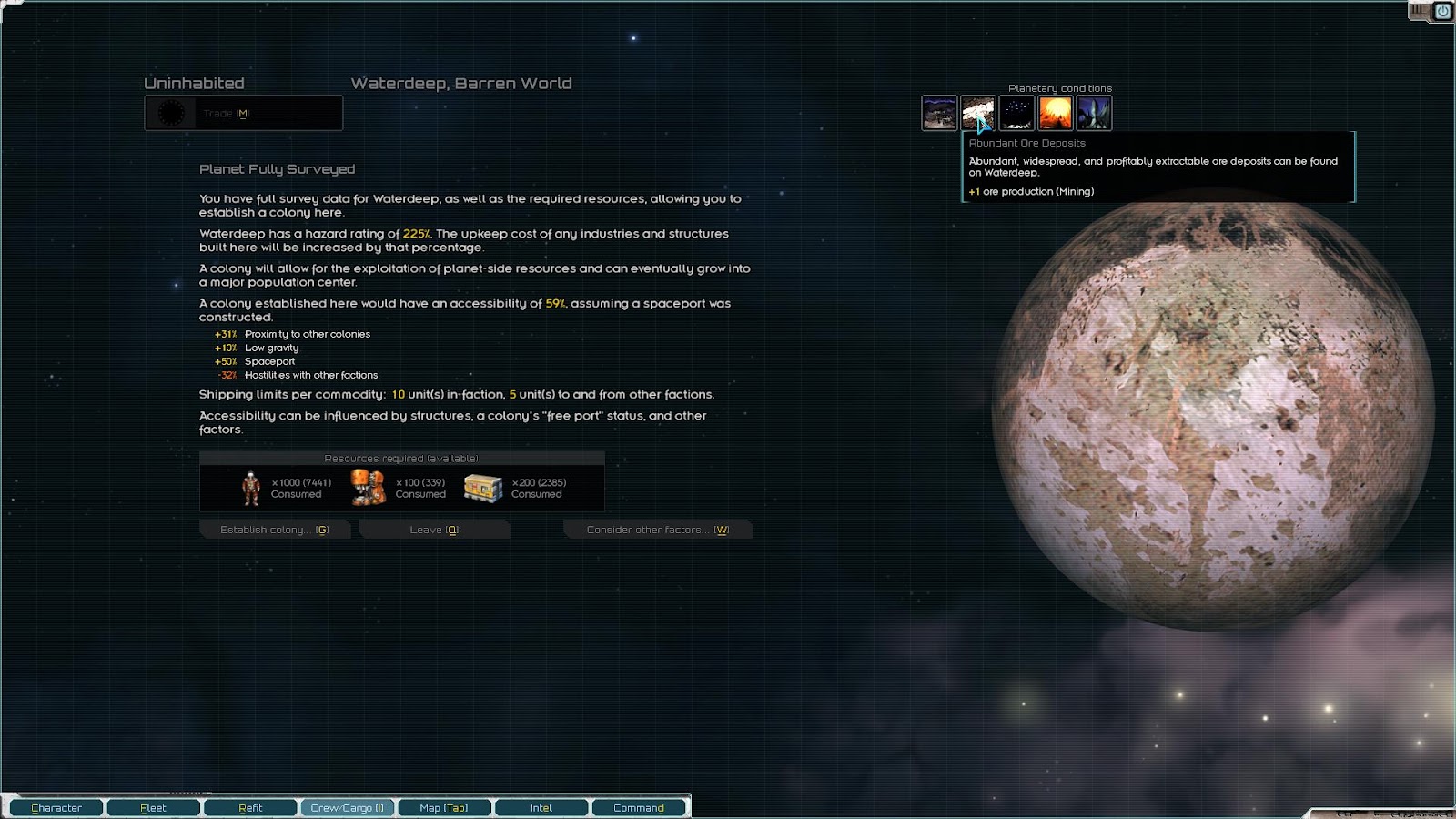 First of all, you can only start a colony on a planet that hasn’t been inhabited or on a planet whose colony has been bombed out of existence (only you are able to do this. Other factions will not do this in the non-modded version of the game). You must have 1000 crew members, 200 supplies, and 100 heavy machineries to start the colony. Also, it is recommended that you have at least 1 million credits on hand as well. Building structures and industries to help the planet grow and become profitable (as well as stable and secure) requires hundreds of thousands of credits per structure/industry. With that said, it is important to plan where you build your colony.

When trying to figure out where to start a colony, it is recommended that you explore and find an uninhabited system. Trying to build a colony too close to one of the factions will make the colony too hard to defend and build up (at least until late-game situations where you are rich and powerful). You’ll need to consider the following when exploring for a ‘home system’: Hazard Rating, Accessibility, Available Resources, and Planet Size. Also, as with any place you are looking to live, you must consider the location, location, location! In other words, you’ll need to concentrate on one system that has a variety of good-sized and profitable planets. Again. The main reason to start a colony is to begin making passive income. 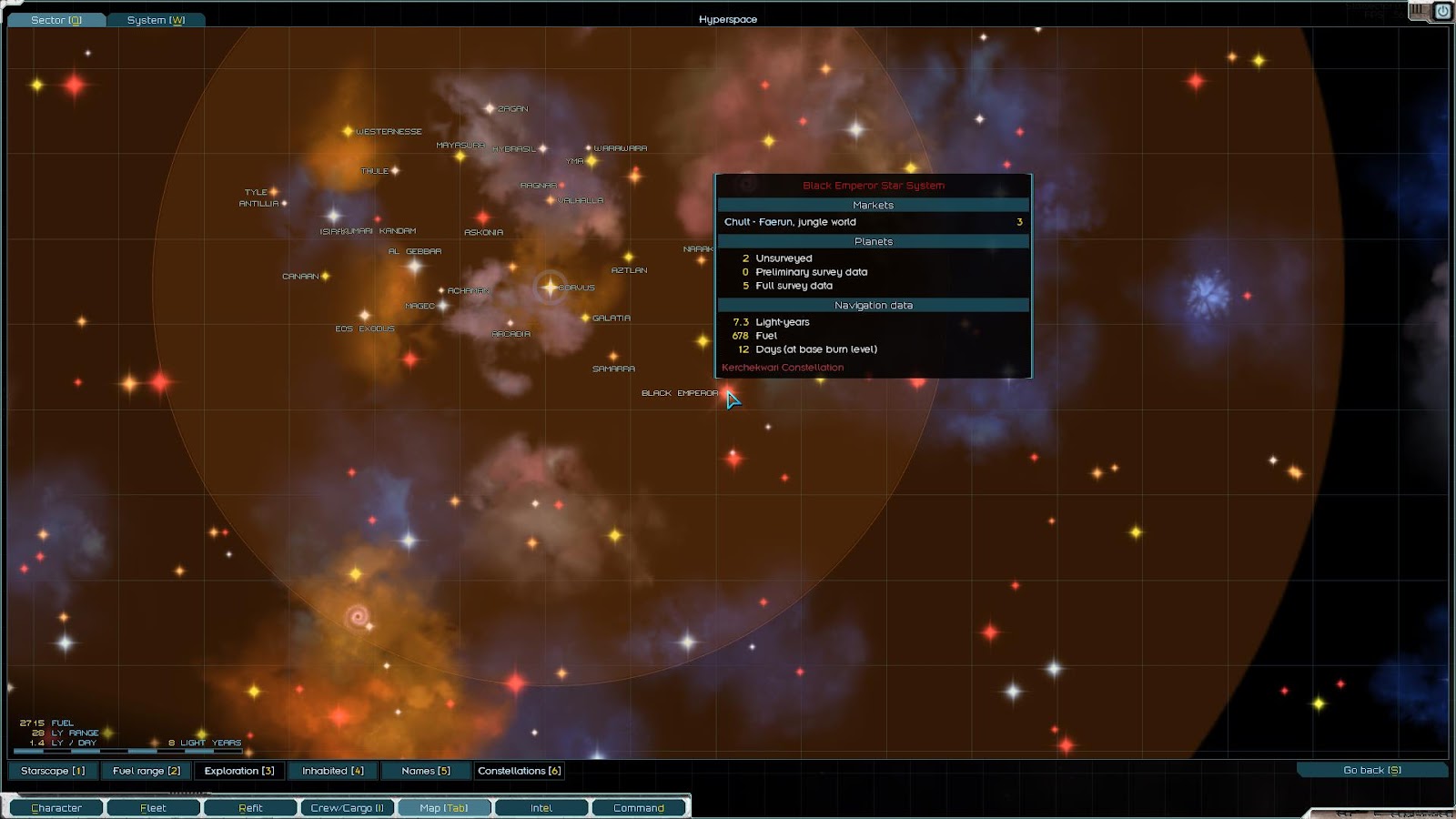 As you explore, take note of how many different planets there are in the system. Once you survey them all, you’ll notice they all have various traits. First off, the Hazard Rating is key. The base rating for any planet is 100%. The higher the hazard rating, the harder it is to build a colony there. Conditions like Hot, Toxic, and so on will increase the hazard rating. Each hazard will slow down the growth of the colony. There are even hazard modifiers that lower the rating such as ‘habitable’ and ‘mild climate’. Don’t be too worried about not taking high-hazard planets as colonies as there are technologies found in ruins as you survey that could potentially reduce the hazard or improve certain industries. As a gauge, anything under +200% is pretty good.

After surveying a planet, the menu will also give you a breakdown of how ‘accessible’ the colony would be. While this info is good to know, a colony’s accessibility is always fluid due to reputation changes with other factions, whether the colony was recently raided, and other factors. Thankfully defensive and colony structures can be built to improve accessibility and stability. 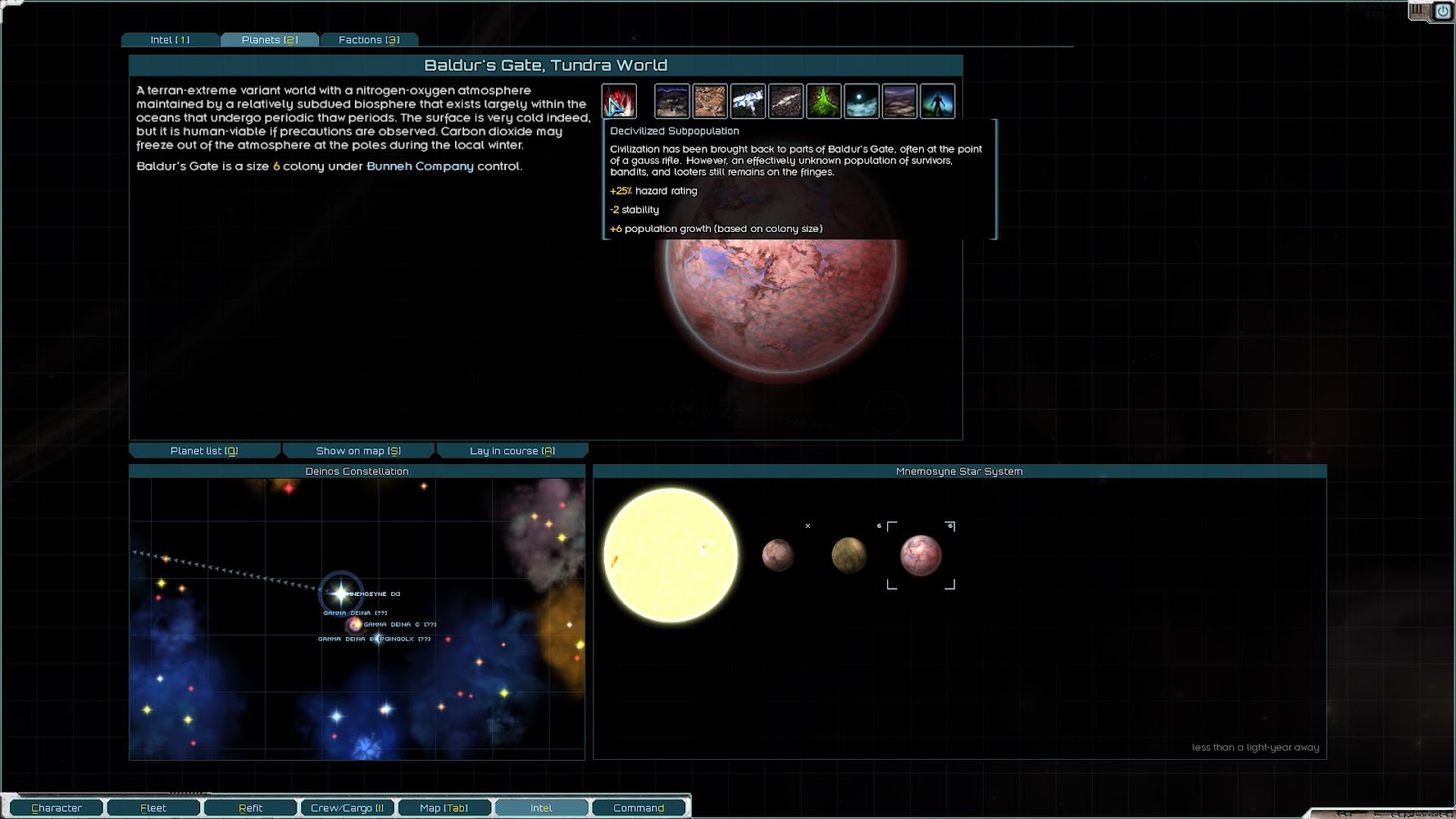 Lastly, paying attention to the resources revealed is key. Resources available are directly tied to most (but not all) of the industries available. Each resource is explained when you place the cursor over it. You’ll notice modifier adjectives like ‘Abundant’, ‘Ultrarich’, ‘Sparse’, and so forth as well as the numerical modifier telling you how many units of that resource will be added or subtracted from production. At the end, it will put the relevant industry in parenthesis. 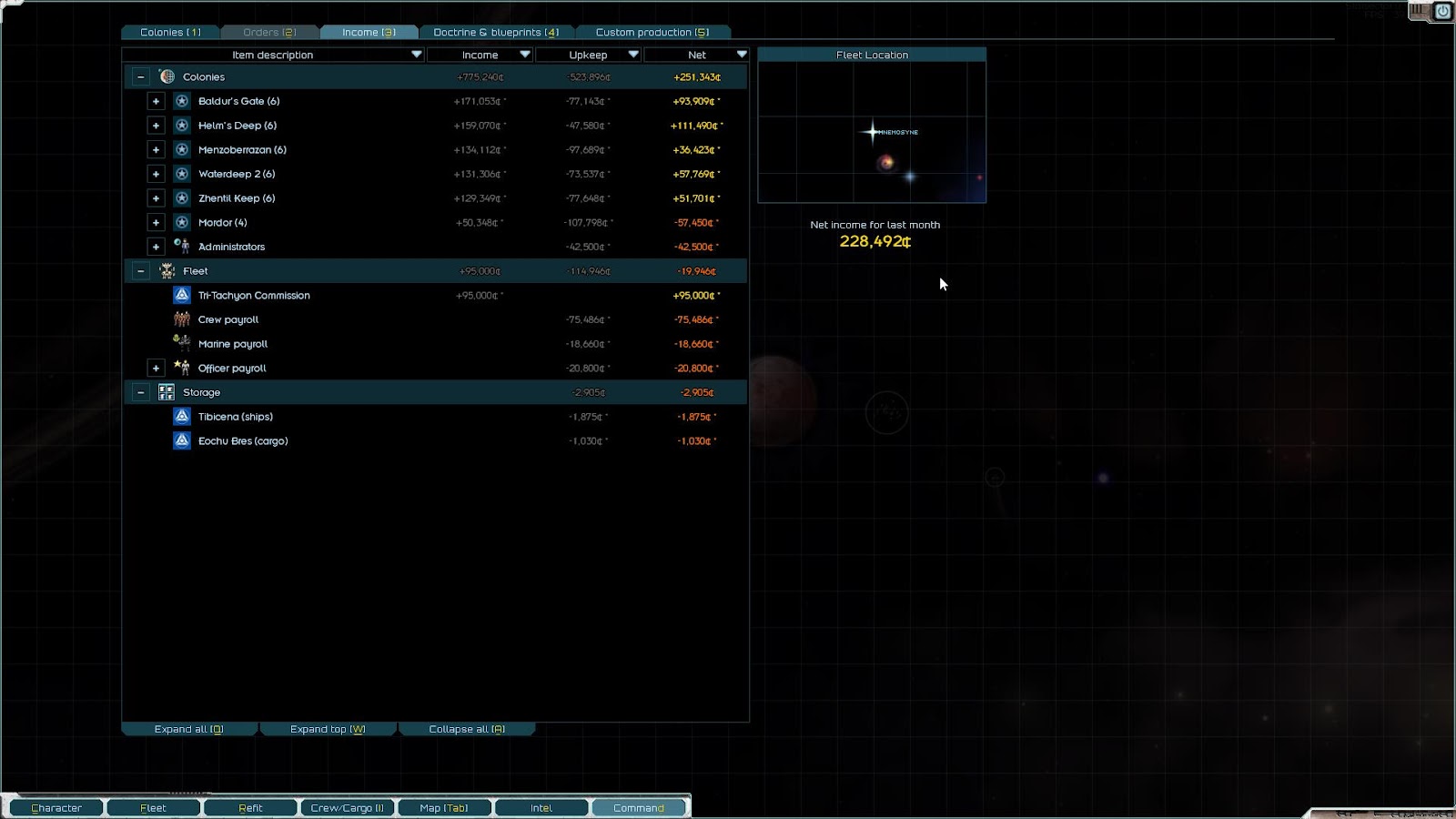 The profitability of a planet will be determined by the amount of resources that can be exported and imported. Once you have more than one colony, the needs of your colonies will be referred to as ‘in-faction’. If you manage to develop enough in-faction resources to not need imports from other factions, then you will be able to quickly maximize profits. Exports are the key to profitability. This means you need to have factions to sell your wares to (so don’t bomb them all out of existence). Also, accessibility is key to profitability. If you have a hostile rep with all factions, then your colony accessibility will be low as will be your profit. However, if you can sneakily disrupt the operations of your competitors through tactical raids to disrupt industries, then you can also increase your accessibility (this increases your market share). 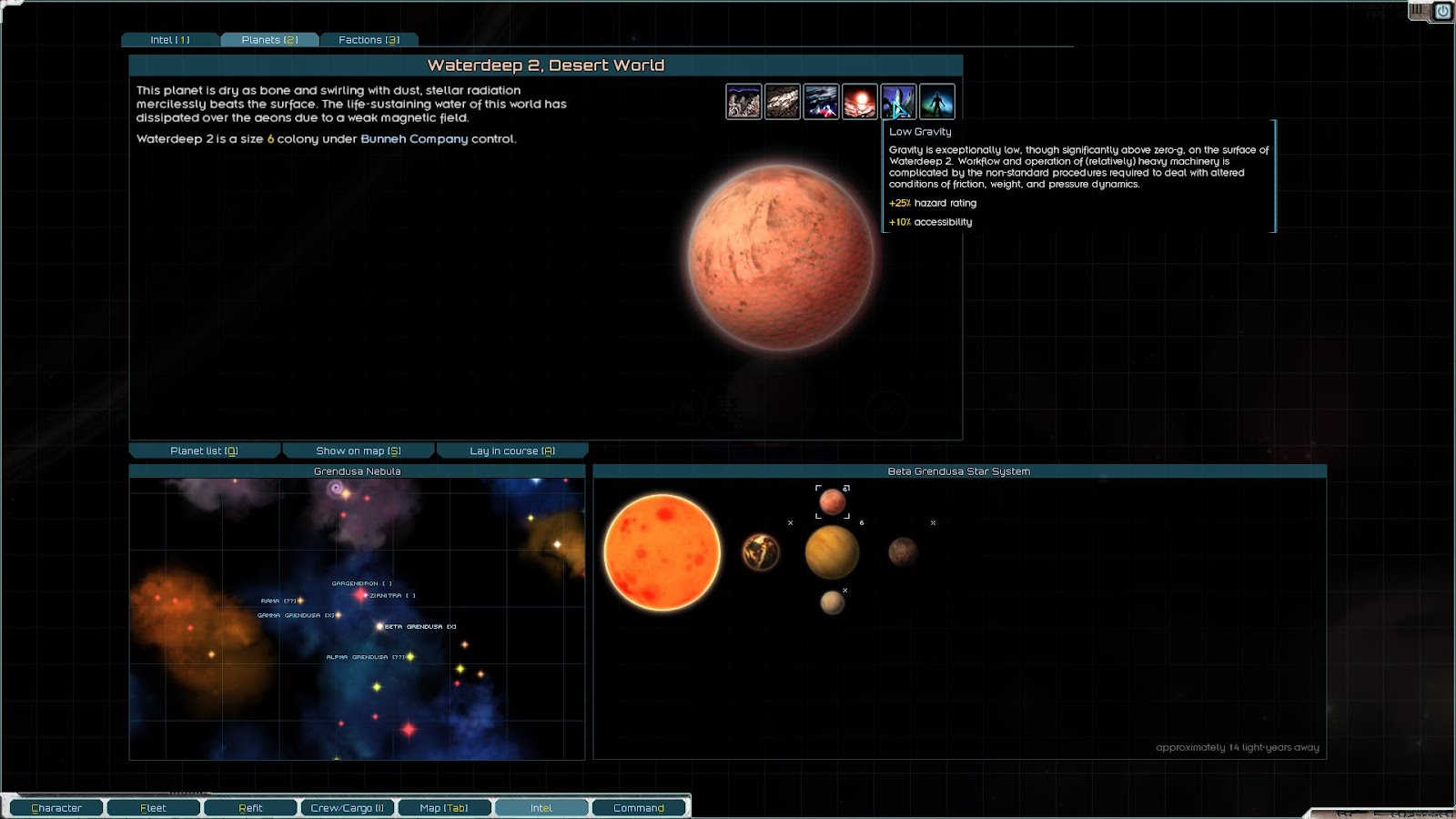 Another fluid factor for colonies to keep an eye on is stability. The max stability rating for a colony is 10 while the base rating is 5 when you start out. There are many factors that can increase and decrease this rating. Various structures can be built to increase this rating such as an orbital station, patrol HQ (for in-system NPC patrol fleets), ground defenses, comm relays, and more. There are also events that will lower the stability too. Pirate activity, Luddic Path sabotage, industry shortages, free port status, and more.

Once your first colony is up, running, profitable, and secure, you can start the process all over again primarily looking for a planet that can provide the resources that your initial colony needs. You can also do a couple more things before starting that process, however.

As you explore the cosmos, you’ll encounter systems with warning beacons. The warnings come in low, medium, and high ratings. Low warnings usually aren’t much of a problem as long as you have a decent-sized fleet. Within each of these systems will be various-sized AI fleets and or stations that will guard or hold various blueprints and colony technology as well as AI cores themselves. These cores (gamma is the lowest, beta is the middle, and alpha is the most powerful) are excellent ways to improve your colonies.

Once you secure an AI core, you have the option of installing one to manage the industry or structure of your choice. Doing so will have predetermined effects on that industry/structure based upon the size of the core. Gamma cores reduce an industry/structure’s demand by one unit. Beta cores do the same thing but reduce the upkeep cost by 25%. Alpha cores and highly coveted due to how rarely you are able to acquire them. These do the same as the other cores but have an additional benefit that is specific to the industry or structure. 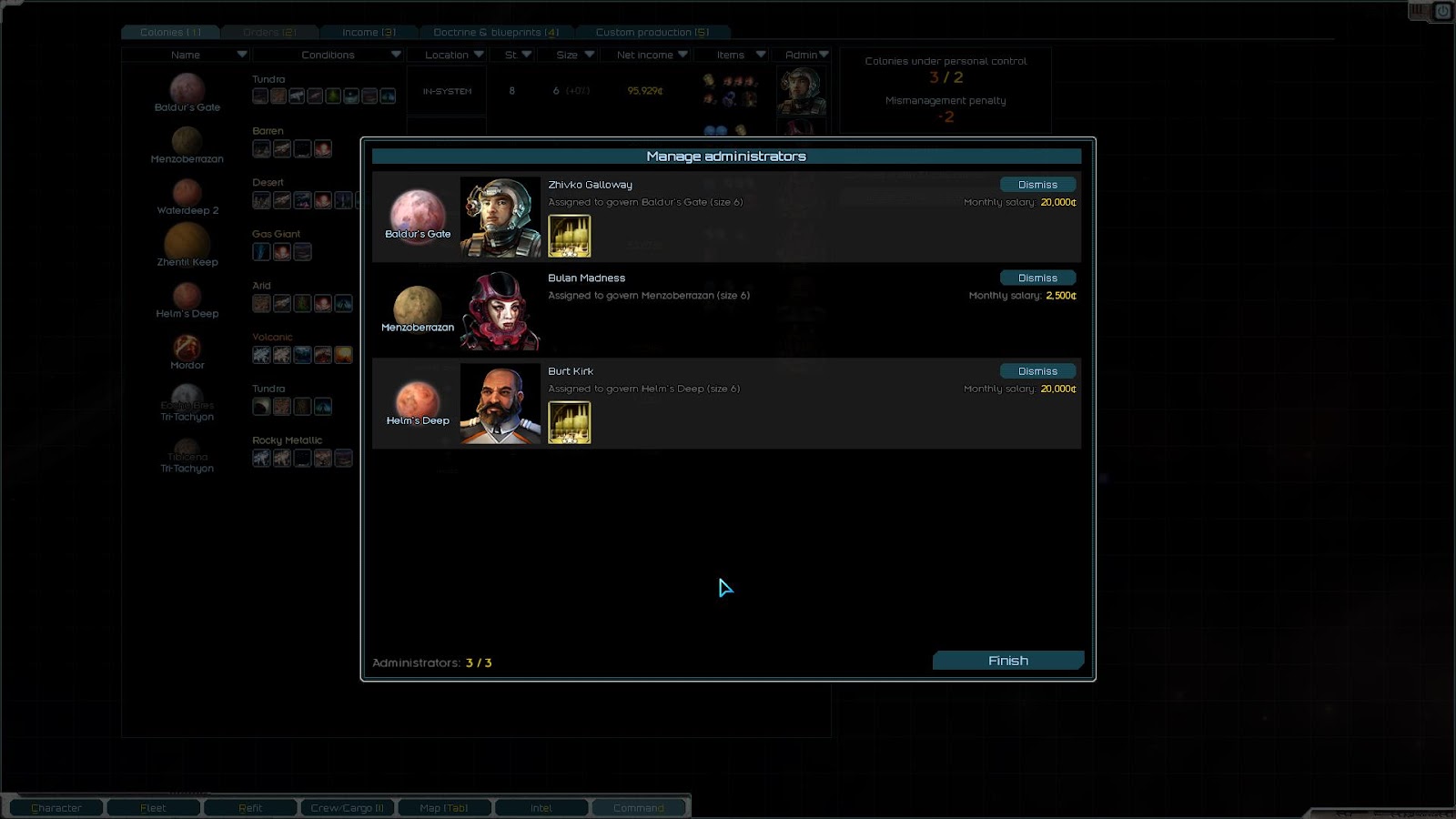 Each colony that you start requires an administrator. By default, you as the player manage the colony. The player can personally manage up to a max of 2 colonies without penalty. You are also allowed to hire administrators as well up to a max of 1. The administrators, however, can only manage one colony. AI cores can be used as managers but there is a chance the AI will ‘go rogue’ so beware if you choose that tactic. If the player manages more than the limit, each colony receives a -1 stability penalty per number over the limit. If the player manages under the limit, the colonies receive a bonus. There are skills that can improve the performance of the colony if you choose them such as Fleet Logistics, Planetary Ops, Colony Management, and Industrial Planning. Colony management will allow the player to manage 4 personal colonies and three administrators.

Those are the basics of colony building. As you progress through the game, different technologies and threats will be discovered that will force you to change your strategy. You may find during late-game that decivilizing a core system planet from a rival faction is the way to go so that you can start a new colony on their planet and reduce their power. However, the rest of the factions will probably not like that tactic.

Stay tuned for more tips as the game continues to be patched! Ever since the release of the ‘No Step Back’ DLC, the META (most effective tactic available) for Hearts of Iron… MMA games typically refer to titles that are about mixed martial arts, a brutal combat sport that’s popularized by brands… Having written multiple times about how I love the fact that Stellaris openly supports modding, I feel that it is…