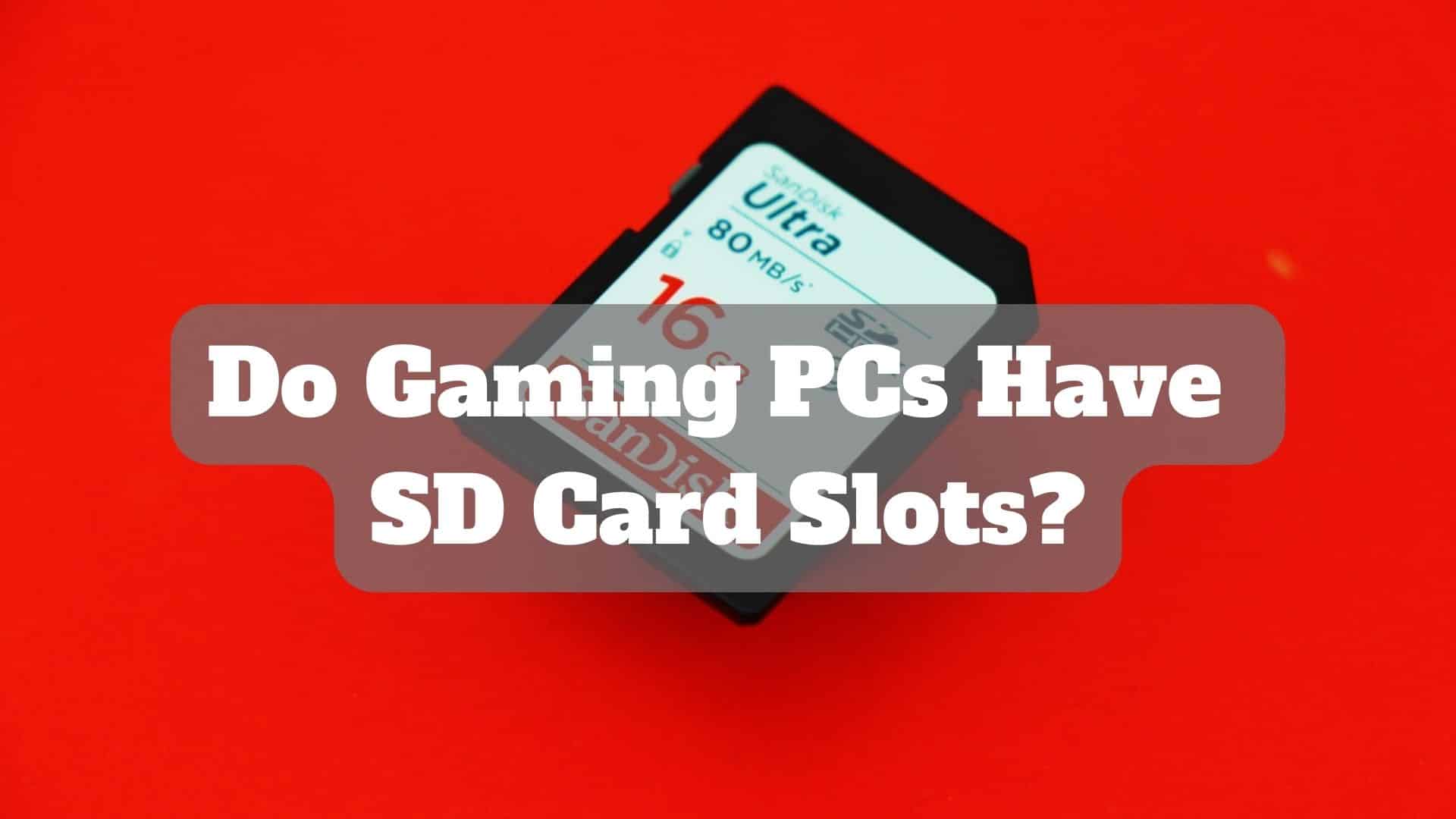 SD cards are a popular storage option with a variety of applications. For one, they’re used by mobile devices, such as phones, tablets, and handheld consoles, to expand their storage space. Because they can have large capacities, going up to 2-4 TB, SD cards are also used in most digital cameras to store high-resolution and 4K media.

Since SD cards are practically hard drives, they’re also compatible with PCs and, by extension,gaming rigs. There are, though, a few caveats.

Gaming PCs largely don’t come with SD card slots by default. However, PCs built for graphic design and video editing may come with a built-in SD card reader in the front bay, as these are more typically used by photographers and people who shoot a lot of videos. To get an SD card slot on a gaming PC, a reader will need to be added to the front bay of its case. There are also external SD reader options that connect to a computer via USB.

Are SD Cards the Same as SSDs?

SD cards and SSDs are similar in terms of their hardware concept yet are radically different in what they can do. Both are storage solutions for computers and digital devices that utilize a technology called NAND flash to store data. In theory, SD cards and SSDs could also reach similar speeds for reading and writing data. However, that’s as far as the similarities go.

What makes the two formats different is their allotted physical space. Because SSDs are roomier, they’re able to create larger data caches, enabling them to run a lot more operations in a short amount of time. Even if manufacturers were to push an SD card to its limits to allow for more caching, the heat this would generate would likely damage the card’s internals.

It’s for this reason that SD cards are better suited for expanding the storage of portable devices. They’re also perfect for transferring data and files between devices.

Where is the SD Slot on a PC?

If your computer has an SD card slot, you should typically find it at the front of its case. Some manufacturers may have a built-in cover that prevents dust from entering the slots, which could interfere with the connectors that read data from your card. You won’t normally find such a card reader module at the rear of your gaming PC as it’s not practical for taking cards in and out.

How to Check if My PC Has an SD Slot?

There are two ways to check if your PC has an SD card reader slot. The first is to check the front of your PC’s case for any compartments or covers hiding the slots behind them. If you can’t find anything like this, then it’s possible you don’t have a built-in SD card slot on your PC.

To definitively check if your PC has an SD slot, you can use Windows Device Manager. After opening it up from Settings, go through the list of available hardware. You should be looking for an entry called Memory Technology Devices. If you can’t find an entry like this, then your PC doesn’t have an SD card slot.

How to Add an SD Card Reader to a Gaming PC?

A USB hub is the most common option for adding an SD card reader to a gaming PC. These devices can have a variety of slots for different types of cards, including SD and microSD. They’re also fairly inexpensive and, by far, the easiest way to add a card reader to your computer.

For a more permanent solution, you can install a card reader module in the front bay of your gaming rig. First, you must ensure that your gaming rig’s case has such a slot. If unsure, you’ll need to check the manufacturer’s specifications. Installing an internal card reader requires connecting it directly to your motherboard.

PC games can’t be bought pre-installed on SD cards. The reason is that your computer wouldn’t be able to recognize its location as the installation process didn’t happen locally on your machine. It’s quite possible though to install and run a game off an SD card. However, its performance would be significantly hampered compared to playing from an SSD or HDD. Computer viruses are programs you don’t want on your PC or anyone else. These viruses can corrupt and destroy your… Since its inception, GameStop has experienced significant developments in its working, systems, and processes. One of the significant changes that… PC gaming has always had a reputation for being a less accessible way to enjoy video games. The average person…